Firefighters, Whales and why you need to back-up your smart phone 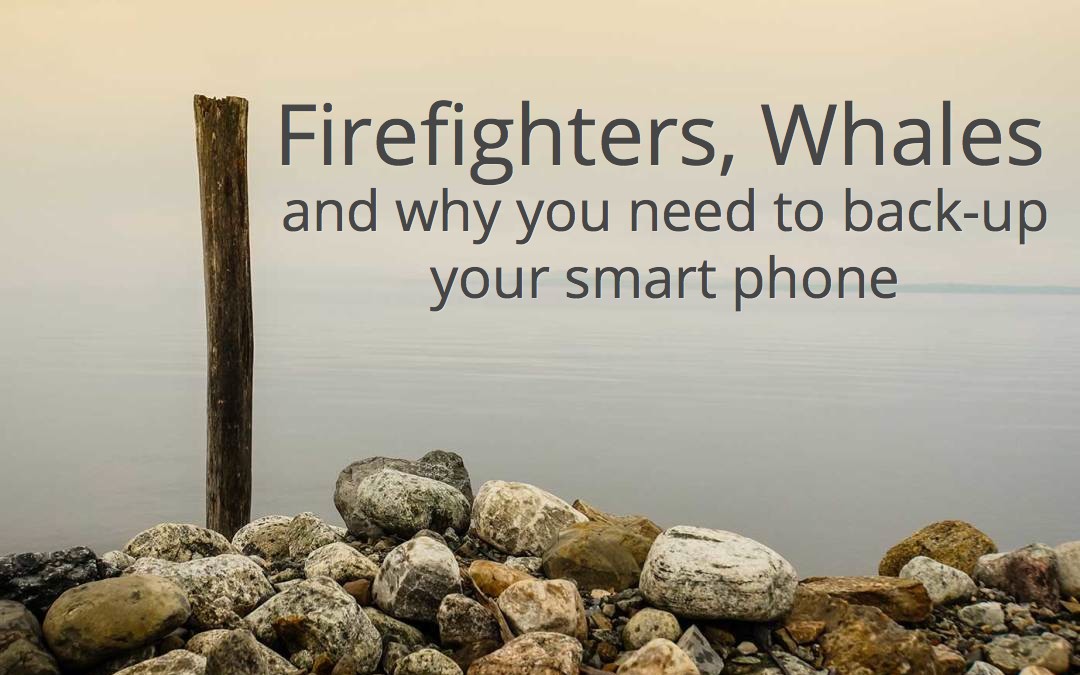 So there was a Therapist, some Firefighters and a pod of Killer Whales…

Sounds like the beginning of a very strange joke, but I promise you it wasn’t very funny (at least at the time – I’m starting to see the humour in it now)

So not that long ago, I was over on Pender Island. I had locked myself away in a friend’s cabin with a colleague, so we could finish a writing project that had been unfinished for waaaaay too long. To celebrate after two days of intense writing we decided to ride bikes down to the ocean to soak in the sun that had been taunting us through the windows, beckoning us to quit working and go play all weekend. And that would have been the end of the story, if we hadn’t heard those fateful words yelled out the window of a passing vehicle as we started to make our way back to the cabin…

Turn around!! J Pod is coming around the corner!!

For those of you that don’t know what J Pod is, they are one of the resident Killer whale pods off the Pacific coast. And for anyone that knows me personally, you would know that I am coo-coo for coco-puffs when it comes to the ocean, and particularly whales and dolphins. So we frantically pedaled back and took perch on the rocky shore, phone (which was also my camera) in hand, waiting with an ever-gathering group of locals, hoping to catch a glimpse of the Orcas.

And that’s when I dropped my phone down a crevasse.

As quickly as it slipped out of my hand, I knew it was gone forever. The clink, clink, clink sound it made as it pinballed it’s way down through the boulders told me I would never get it back. But that’s where the Firefighters come in.   There just happened to be an incredible group of local Firefighters who had also come to see the whales (who for the record, turned around and never made it to where we were) and they took it as a personal mission to get me my phone back. It was an epic undertaking. There were about 10 people trying to help. There were sticks with duct tape, people had gone home to bring back pincher tools, there were boulders being levered out with 2×4’s. I finally had to beg them to stop after 90min when someone lowered a teenager into the thin crack in the rocks while holding his ankles (because he was skinny with long arms obviously!). I knew it was time to let it go, so we sadly made our way to the ferry and the long ride home hoping that I hadn’t lost everything.

So why am I telling you this story?

Because when you run your own business, your phone is your lifeline even more than your computer – and not everyone backs up their phones!

Could have is the operative word.

It wasn’t until we were back in the city that I was able to confirm what I had been crossing my fingers for the whole way home. A few years ago I had started backing up my phone using my google platform so that my email, calendar, and contacts all continuously sync with my online accounts. In the end, I did lose some pictures from a recent trip, but none of the information that related to my businesses was impacted. It was an expensive inconvenience, but not the catastrophe that I’ve seen others experience.   I have a colleague who lost all the information on her phone, which included her contacts and calendar. She then had no idea which clients she had booked from that day forward. She had to go through every client file and call each one individually to confirm if, and when, they were actually coming in or risk not being there. Not to mention any other meetings and appointments she had. It took her almost two months before she was confident that she had her schedule back in order again.   So learn from other’s mistakes on this one and don’t become a cautionary tale yourself. Make sure that you find someway to back up your tools, particularly your phone. When you are in business for yourself, it’s an absolute necessity.   What systems, software or strategies do you use to back up your phone or computers? I would love to hear from you. Comment below or on the Facebook page.